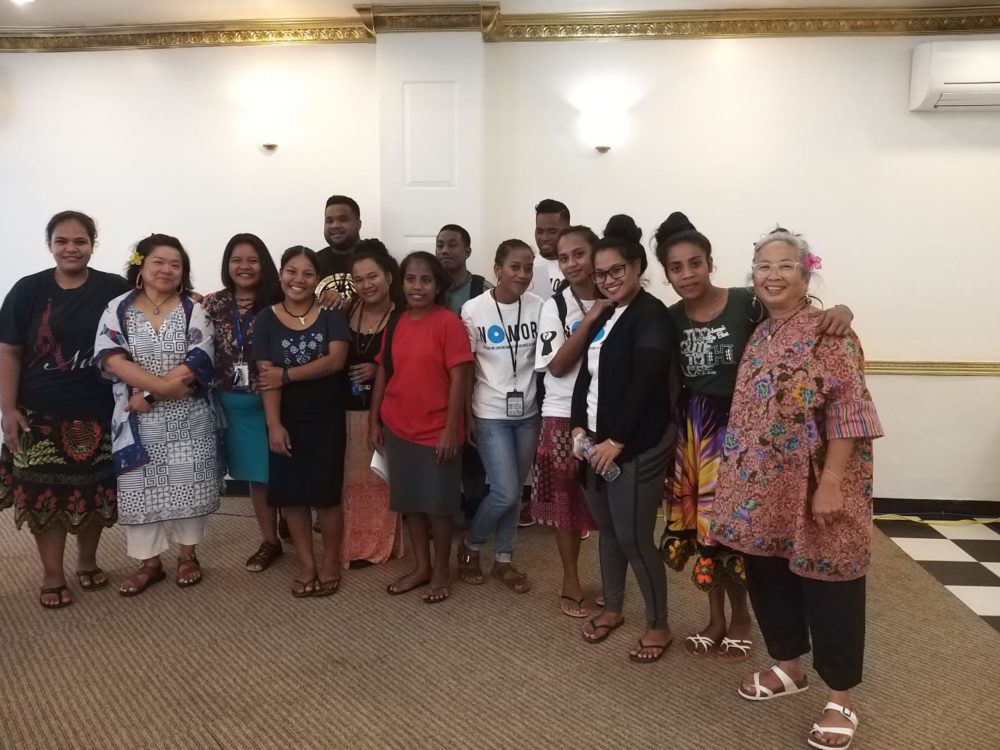 Work with the College of Marshall Islands (CMI)

In June 2019, National Asians and Pacific Islander Ending Sexual Violence (NAPIESV) visited the island of Majuro, the capital of the Republic of the Marshall Islands (RMI), which is located north of the equator, between Hawaii and Australia.

NAPIESV hosted a three-day conversation on addressing sexual violence with College of the Marshall Islands (CMI) students and staff, and three community partners.  The impetus for this action was the gang rape of a young woman in Majuro by students from CMI.  Rachel Solomon, Dean of Students of CMI, requested a facilitated discussion on sexual violence from NAPIESV, who has had extensive experience in providing training and technical assistance in responding to sexual violence in U.S. territories or associated sovereign nations, and Marshall Islands in particular.

One of the foundational principles of NAPIESV’S work to help end sexual violence is exploring histories of colonialism + neo-colonialism, militarization and environmental justice, and their connections to the perpetuation of gender-based violence.

RMI, also called the Marshall Islands, is an island nation colonized by Spain, Germany, Japan and the United States in that order since 1592 through 1979.  In 1986, RMI achieved full sovereignty after signing the Compact of Free Association (COFA) with the United States. The compact includes two agreements: one with RMI and the Federated States of Micronesia, and the other between the United States and the Republic of Palau (whose independence was established in 1994). The COFA agreements granted self-governance to the three island-states while supporting their self-determination and economic self-sufficiency through U.S. federal funding and services, including traveling and working freely in the United States. The United States provides $1.5 billion in aid under COFA, spread out over 20 years (the agreement with Palau expires in 2023 and the agreement with RMI and FSM expires in 2024), in exchange for permitting the United States to have exclusive military strategic positioning in the Pacific.   Unfortunately, the welfare reforms of the mid-1990s in the United States stripped COFA communities of eligibility for most federal benefits, including Medicaid, exacerbating the health impact of U.S. nuclear testing in the region.

NAPIESV staff spent half a day with Julia Alfred, the director of Single State Agency for Substance Abuse Prevention and Treatment Service, a local organization based in Majuro.  Julia shared stories of RMI colonization and especially U.S. militarization; the displacement of the people of Bikini, an atoll of 23 islands whose inhabitants were displaced in 1946 so that the United States could conduct nuclear tests until 1958; and the naming of villages in Majuro after U.S. commanders’ wives, such as Laura, Rita and Rosalie.  There is no acknowledgement that those villages have indigenous names. The nuclear presence in the Pacific resulted not only in forced migration but also badly affected the health, ecology, education, economy and politics of the region.  When the southernmost Kwajalein island of RMI was designated as a support base for U.S. nuclear tests conducted at Bikini Atoll, the inhabitants were relocated from the 1950s through the early 1960s to Ebeye, known as the “slum of the Pacific,” which used to be a Japanese seaplane base before the Pacific War between the Allies and Japan from 1941 to 1945.  The evacuated islanders not only lost ownership of their land and access to their marine livelihood, but also failed to get enough compensation, housing and employment that were guaranteed as well as were unable to hold land rights in Ebeye, giving rise to ongoing conflicts between residents. In addition, the steady arrival of migrants from other islands led to housing problems and scarcity of resources. The nuclear-waste dome in Bikini that was created in 1980 to house the deadly radioactive debris of the 1940s and 1950s, is cracking and remains neglected. Because of climate change, there are no beaches in Majuro that many residents had used as “shortcuts” to attend school. Julia expressed concerns about the rising sea levels because the dome was not properly lined, threatening the structure and sparking a catastrophe.